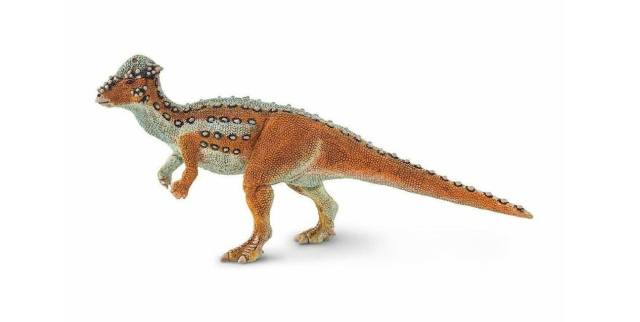 Pachycephalosaurus was formally discovered and named in 1931, though some fossil material may have been found much earlier. It is known only from skulls, and its body design is based on more completely known relatives including Stegoceras.

It is believed that two similar pachycephalosaurs – Dracorex and Stygimoloch – may actually represent different growth stages of Pachycephalosaurus. This theory suggests that as the dinosaur grew, the spikes on its head became more blunt, and the dome on top of its skull became more pronounced.

Pachycephalosaurus lived in the Late Cretaceous Period, in what is now North America. It is one of the last non-bird dinosaurs to live, dying out at the very end of the Cretaceous Period around 66 million years ago.